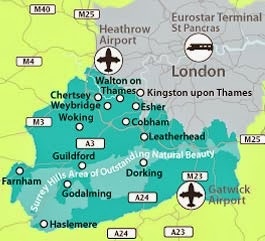 As an office refurbishment company with our Head Office in Salfords, Surrey, we are neighbours to a multitude of successful multinational companies with their headquarters in this beautiful county. So for our first instalment of our #LoveSurrey Twitter campaign, we explore discover the facts and figures of this 'powerhouse' economy.